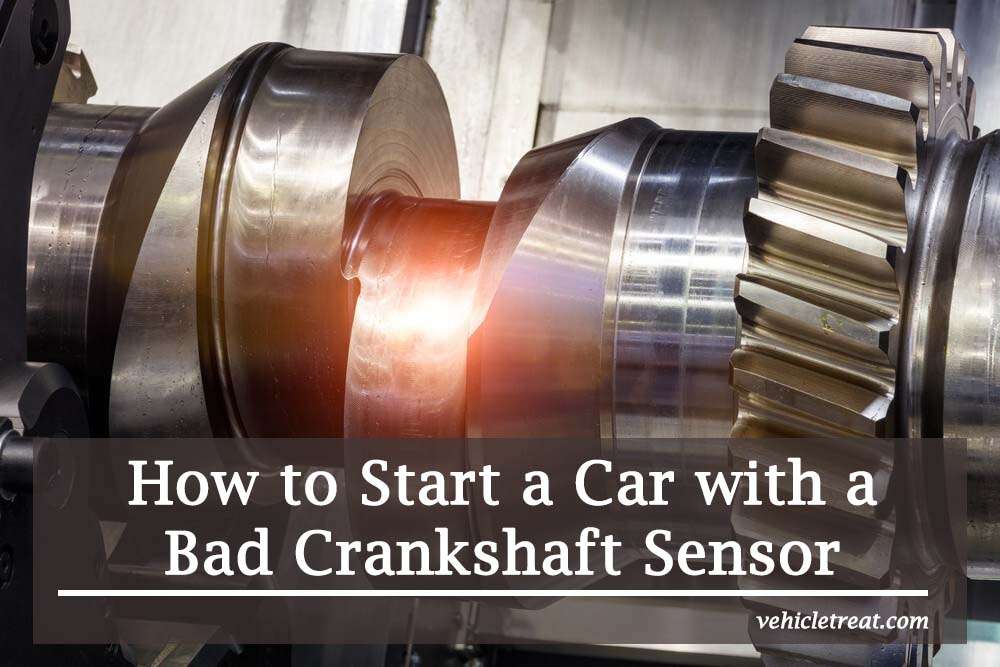 It can be frustrating to start your car when the crankshaft sensor is bad. You may have tried everything and still have trouble starting your car.

Crankshaft sensors are a common part of your car’s ignition system. They can fail for several reasons, but it is hard to diagnose the problem because there are no warning signs until you try to start your engine and nothing happens.

This article will teach you how to troubleshoot a bad crankshaft sensor and fix the problem yourself.

The key is knowing when the crankshaft sensor goes bad and how it affects your vehicle’s performance. The most common symptoms of a failed crankshaft sensor are hard starting, stalling, or rough idle during the engine warm-up phase.

What is a Crankshaft Sensor?

The crankshaft position sensor is an important component in the engine. It takes electrical input from sensors, including oil pressure and camshafts, to determine how fast the crankshaft is turning and sends that information to other parts of the vehicle’s control system like the engine control module (ECM) so they can adjust ignition timing accordingly.

It can fail for several reasons, but you may not know that there is a problem until your car won’t starts.

How does Crankshaft Position Sensor Work?

The crankshaft position sensor is a device attached to the end of the crankcase that detects the engine’s RPM and sends this information to an engine control module.

The sensor may be located right above the ignition, so in order for it to detect the RPM level of the engine, it needs to have an unobstructed path of clear air.

The crankshaft sensor is usually attached to the rod that powers the crankshaft, which moves the pistons up and down.

It sends a signal back to the computer when it rotates so that the ECM knows how long each stroke of the piston takes and which direction to send current to continue firing each spark plug.

Here are 9 symptoms that indicate a bad crankshaft position sensor:

The main symptom of a bad crankshaft position sensor is when you try to start your car, and the engine won’t start at all, or it stalls immediately after starting.

Your engine may have enough current running through it to turn over, but there may not be enough energy produced by the ignition system to keep the spark plugs firing for longer than a few seconds after starting.

A bad crank signal can cause an engine to stall when it enters the warm-up phase because the ECM is receiving conflicting information about how much fuel should be delivered.

The ECM may detect that the car is idling too fast, but it will not know if this is due to a normal warm-up or an indication of a problem.

If your crankshaft position sensor has failed completely, it will cause hard starting and stalling issues when the engine is cold, but after restarting your engine several times, you notice that the issue goes away until the engine cools down again then starts causing problems again. Decreasing or increasing idle rpm’s can temporarily fix this kind of issue until restarting as well.

A bad crankshaft sensor can cause your car’s engine to burn more fuel than usual, even if there are no immediate starting problems or performance issues while driving.

This extra combustion may lead to excess gas being released into the crankcase with each piston cycle, which in turn causes premature wear on all moving parts, including pistons rings and bearings, and excessive heating within the engine compartment that may also cause damage over time.

The most common codes that indicate a failure of the crankshaft position sensor are P0455, P0456, and P0457. These codes often appear together with other performance problems such as rough idle, stalling, or misfires during the warm-up period, fuel consumption increase.

In this case, the crankshaft sensor may not fail completely, but it is sending faulty information to the ECM, which causes poor communication between the ECM and ignition system. As a result, your car will experience an abnormal engine noise when engine RPMs are low.

The most common symptom of a completely failed crankshaft position sensor is the burning smell that comes from the area around the ECM, which can cause small damage to other electronics in the process.

You can also hear a rattling noise coming from the engine compartment that increases severity as you accelerate and decelerate or your car is braking. This vibration indicates there is an imbalance in the crankshaft position sensor.

How to Start a Car with a Bad Crankshaft Sensor

When your crankshaft position sensor fails, and you need to get the engine started and running smoothly again as soon as possible without going to mechanics, there are a few things you can do to get your car started without replacing the sensor.

This may be the quickest and easiest way to diagnose the problem. You can use an OBD2 scanner tool, which is available at most auto parts stores for around $25, to read codes that may have been stored in your vehicle’s computer. Codes related to a failed crankshaft position sensor may include:

If your crankshaft position sensor fails, and you have a jump starter or battery booster pack for your car, you may be able to get things going by hooking it up to your battery and trying to start the engine.

If you have a weak or dead battery, you may get the engine to start once or twice before needing a new battery. Be sure to let the engine run for a few minutes after starting.

Check that nothing is loose in the area of the crankshaft position sensor connector or transmission connector because maybe your CPS Sensor is good, but the wires to that sensor are bad, and they get disconnected when you move your engine around. Check fuses and clean them if necessary.

Corrosion can build up on the electrical connector pins, which can cause a poor connection. Try cleaning the area around the crankshaft position sensor with an electronics or carburetor cleaner spray to remove any corrosion. If that doesn’t work, you may want to replace the connector.

If cleaning and checking fuses do not fix the problem, you can simply replace the sensor. This is not an easy job, and if you are not DIY-savvy, you will need to tow your car to a shop for repair. The CPS sensor costs around $100, but installation can cost between $200 to $300.

The crankshaft position sensor can be tested with a multimeter. First, you will need to remove it from the engine. Then connect one lead of the multimeter to the ground and touch the tip of an alligator clip to each wire terminal in turn.

Diagnosing a bad crank sensor with an oscilloscope:

To test if your crank sensor has failed or not, you can do this test. This is a good way to check if the crank sensor is bad without removing it from the engine.

What problems faulty Crankshaft Sensor can cause?

A faulty sensor will make injectors deliver fuel at a higher than needed rate, affecting performance levels. It may also increase the frequency of misfire or damage other parts of the engine, such as pistons or valves.

How much does the crankshaft position sensor cost?
The cost of the crankshaft position sensor depends on the car’s make and model. The average cost is around $100, but some sensors cost more than that.
When should you replace the Crankshaft Position Sensor?
A crankshaft position sensor should be replaced when it has been damaged or if it isn’t working properly. A bad sensor can cause the engine to stop running or run very poorly, so you will need to replace it as soon as possible. The sensor should be inspected regularly and replaced every 50,000 to 100,000 miles (80 000-160 000 kilometers).
Why did my car start to stall after replacing the CPS Sensor?
You should check the connections and make sure they’re not crossed. Check that the engine harness is properly connected to the CPS sensor. Also, check that the ECM is properly installed. Check all of your connectors to make sure they’re on tight, and the clips are fastened well.

In this guide, we’ve talked about the symptoms of a bad crankshaft position sensor and how to start a car with a bad Crankshaft Sensor.

We hope that you were able to find an answer for your car troubleshooting issue from our comprehensive list of potential causes or by using one of the actions outlined in our repair guide!

If not, contact us and let us know how we can help you out. Our team is always happy to lend a hand when there are questions about automotive maintenance!